The Forth Bridge has been officially inscribed as a UNESCO World Heritage Site at the 39th session of the World Heritage Committee in Bonn. The world-famous bridge is Scotland’s sixth World Heritage site, joining Edinburgh Old and New Towns, the Heart of Neolithic Orkney, New Lanark, the Antonine Wall and St Kilda. 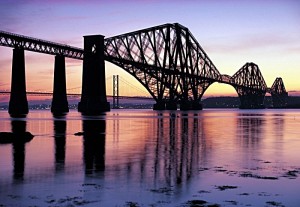 The 125-year-old cantilever bridge spans the Firth of Forth on the east coast of Scotland and is known as one of the industrial wonders of the world. When it was constructed it was one of the most ambitious projects of its kind ever attempted, and at its peak, more than 4,500 men were employed building it, with construction taking eight years to complete.

The bid for World Heritage Status was taken forward by the Forth Bridges Forum, established by the Scottish Government to promote the three Forth Bridges.

– The Forth Bridge is known as one of the industrial wonders of the world, and it is fitting it has been recognised as one of Scotland’s six World Heritage Sites. I congratulate everyone involved in this bid.

– The Forth Bridge’s Inscription as a World Heritage Site is an honour, and true recognition of the Bridge’s unique place in Scotland’s history.

– Spanning two and a half kilometres and comprising 53,000 tonnes of mild steel, the Forth Bridge is a monument to innovative industry and engineering. Its giant double-cantilever towers, with their powerful yet graceful design, are recognised the world over.

– The Forth Bridge is an outstanding example of Scotland’s built heritage and its endurance is testament not only to the ingenuity of those who designed and built it but also to the generations of painters, engineers and maintenance crews who have looked after it through the years.

– The Scottish Government and its agencies are working together to ensure our diverse historic environment — from the industrial heritage of the Forth Bridge and New Lanark to the Neolithic Heart of Orkney — is understood, valued, cared for and protected now, and for future generations.”

– The Forth Bridge being awarded UNESCO World Heritage Site status is an outstanding achievement and I would like to congratulate everyone involved in putting together the successful application.

– As far as potential visitors to Scotland are concerned, World Heritage Site status lends even greater aura and appeal to one of the planet’s most instantly recognisable landmarks. And the timing is perfect as, in 2016, this country will celebrate the Year of Innovation, Architecture and Design and you would be hard-pushed to find a better example of all three qualities anywhere in the world than in the Forth Bridge.”

– Network Rail, as owner of the bridge, is honoured by UNESCO’s decision to inscribe the Forth Bridge as a World Heritage Site.

– The Forth Bridge is a prime example of civil engineering and an iconic structure, not only in Scotland but across the world.

– The awarding of the inscription is the culmination of a great deal of planning from a wide range of organisations and a testament to the hard work and dedication of those who built and continue to maintain the bridge.”

airBaltic passengers up +19% in January 2020
Britannia i verdensklasse