Ryanair today (4 July) called again on the European Commission to take action to prevent the skies over Europe being closed yet again tomorrow (Tues) by French ATC unions. 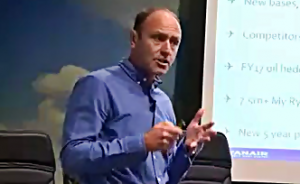 Ryanair regrets that it has been forced to cancel 102 flights on Tuesday (5 July), over France, in what will be the 53rd French ATC strike in 7 years, and 13th in the last 14 weeks. Over 18,000 Ryanair customers will have their flights and holidays cancelled tomorrow, and over 100,000 others will suffer severe delays while this French ATC union yet again (13 times in 14 weeks) closes the skies over Europe.

Ryanair and other EU airlines have repeatedly called upon the Commission to introduce three simple measures which would alleviate the impact of these frequent ATC strikes on Europe’s citizens as follows:

Ryanair advised customers travelling on Tuesday to check the status of their flight on the Ryanair.com website before travelling to the airport, and urged all its customers to sign its â€œKeep Europe’s Skies Open” petition, which it will present to the European Commission when it accrues a million signatures.

– These unacceptable French strikes have become weekly events by now, aimed at causing maximum disruption for families and business passengers, which is why we are calling on the European Commission to take action to prevent these ATC strikes from disrupting the travel plans of Europe’s citizens and their families.
The recent Brexit vote underlines that the EU Commission must begin to deliver real benefits for Europe’s consumers, and show families and holiday makers that Europe is on their side and will not allow a small group of French ATC unions to repeatedly close the skies over Europe.”