Onboard SAS direct flight SK6953 from Stockholm to Austin and SXSW, Kim Cesarion held his world premiere of his new single â€œCall on Me” 30 000 feet in the air. 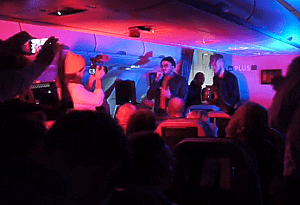 Scandinavian Airlines, the first airline to fly direct from Scandinavia to Austin Bergstrom International Airport, Texas, for SXSW, hosted events and meetings at the House of Scandinavia, including Scandinavian breakfast every day and a pop-up restaurant by legendary chef, and co-founder of noma, Mads Refslund.

During the second flight Stockholm to Austin, Kim Cesarion world premiered his new single â€œCall on Me”, which is out on Friday.