After a long-haul flight – and in the past 2 weeks, I’ve flown into 5 countries! – I always wake early, famished. I know that even modest European hotels put out a big breakfast spread! 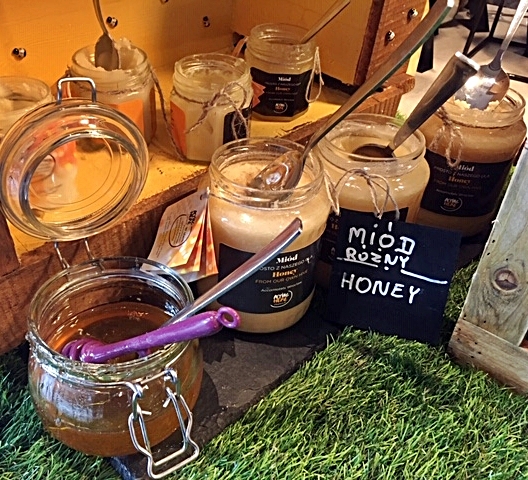 Novotel Wroclaw Centrum Hotel in Wroclaw, Poland, certainly had some interesting offerings! is a good few blocks from the central square, but it’s in the thick of world history. Wroclaw is at the intersection of 2 ancient roads: the Amber Road is prehistoric and the Via Regia dates from the early Middle Ages. As you can imagine, the buffet has a lot of different cultural influences! I was happy to be hosted to experience it.

They have a whole congee setup, along with rice noodles, for Asian visitors.

They also had the beans and hotdog fixings for a British repast, but not the stewed tomatoes, etc. There were also white sausages and smoked kielbasa. If you just wanted to have a plain hotdog, here were the condiments. 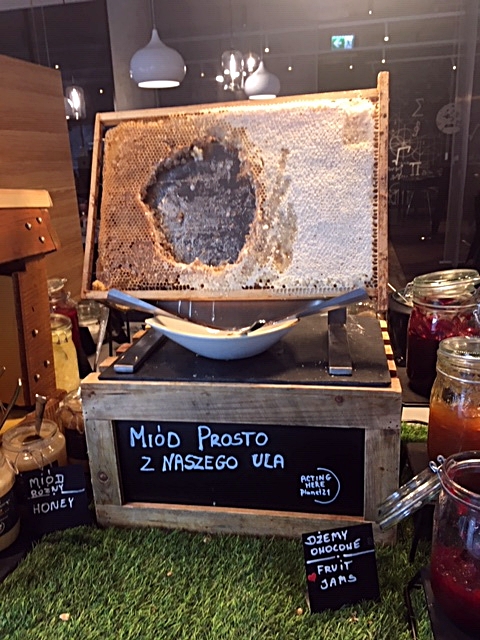 Each day, I had a little of the raw honey and honeycomb, because that’s supposed to be healthful. They had a mellow sweetness. The hotel also makes its own chocolate sauce, but I didn’t get around to sampling it.

There was a small selection of cold cuts, including sliced ham, white cheese, a house-made pate’ and a smoked fish. On one day, there was a creamy salad that I loved, though I know that it was super high in fat/low in fiber. It had mayo, cucumber, cheese, scallion and I don’t know what. It never reappeared. 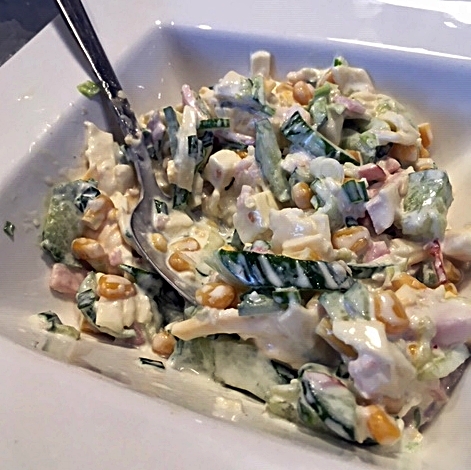 Vegans will be happy with the large selection of seeds and nuts, as well as the various hummus types and pastes, which they call â€œpasta”, a little confusingly.

There was a bread bar. I was surprised to see that the loaves were more like Italian bread than Scandinavian bread (with seeds on top). I tried one with a crispy crust and center with a bit of sourdough chew. 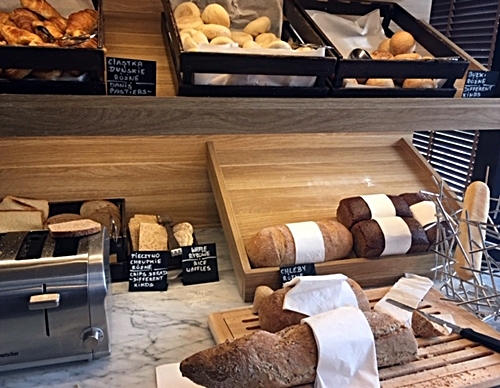 I really enjoyed the make your own juice, with a juicer! There were two kinds of apples, pears to juice, along with a great selection of veggies. I made my own kind of V-8 each day, with fresh tomatoes, carrots, beets, cucumbers. I saw big hunks of horseradish to add, but the first day, I stayed clear. However, I realized my juice needed a little something . . . so in subsequent days, I was adding two big hunks of fresh horseradish!

Really, I would add more, if given the time to develop my recipe. I feel like it was an important addition of vitamin and fiber, because they can be difficult to consume enough while traveling. Besides juice (and a ready-made juice machine), they had an Italian coffee beverage machine.