Aeroflot has taken delivery ofÂ its four new aircraft. These include two Airbus A320s, an Airbus A321 and a Boeing B737-800 aircraft.Â All aircraft are delivered toÂ Aeroflot directly from the manufacturers. 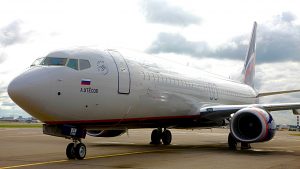 The aircraft have been named in honour of outstanding Russian citizens who contributed a lot to artistic and cultural development. One A320 has been named after Aleksei German, a film director and a screenwriter, while the other — after Fyodor Dostoevsky, a world-known classical writer. A321 bears the name of Yuri Levitan, the primary Soviet radio announcer during and after Great Patriotic War. B737 has got the name of Leonid Utyosov, a famous singer and actor.

The A321 airliner is designed in a new enhanced two class composition with 16Â seats inÂ business and 167 inÂ economy.

A320s and A321 are fitted with state-of-the-art aerodynamic wing-tips known as Sharklets.

Aeroflot operates Ð320 family aircraft across its European and domestic routes network. A320 family airplanes satisfy the highest reliability, safety and comfort standards and are considered among the best for mid-range flights.