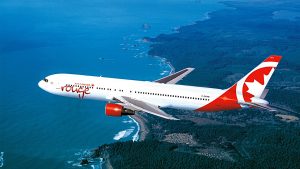 – The addition of our flights to Frankfurt, one of Europe’s most important hubs, offers customers a wide array of convenient choices and the ease of one-stop connections with our Star Alliance partner Lufthansa when travelling to southern, central and eastern Europe as well as Africa, the Middle East and beyond.

– We will be the only airline flying non-stop between YVR and the two largest airports in the London metropolitan region during the peak summer travel period with the addition of London Gatwick. By next summer, Air Canada will serve five European destinations non-stop from YVR including two significant hubs, Frankfurt and London Heathrow, London Gatwick, Dublin, and on a code-share basis with joint venture partner Lufthansa Munich, strengthening YVR as an important hub that connects our B.C., Western Canada and U.S. routes to our expanding international network,” concluded Mr. Smith.

– What an amazing year it has been for Air Canada and YVR,” said Craig Richmond, President & CEO of Vancouver Airport Authority.

– I want to thank Air Canada for continuing to grow its international hub out of YVR and delivering a steady stream of excellent new services. Air Canada’s new non-stop services to Frankfurt and Gatwick will further expand this award-winning airline’s reach into key European markets and will provide incredible benefits for our passengers, partners and communities.”

– Air Canada’s new flights from YVR to Frankfurt and London Gatwick are great news for B.C.’s diverse tourism sector. Already this year we’ve seen year over year European visitors increase by nearly 18 per cent. These new flights will bring even more visitors while creating jobs and spin-off benefits in our hotels, tourism attractions and businesses,” said the Honourable Shirley Bond, Minister of Jobs, Tourism & Skills Training in BC.

Next summer, Air Canada will operate to Frankfurt from five points across Canada: Vancouver, Calgary, Toronto, Montreal and Ottawa.

Air Canada’s Vancouver-London Gatwick service will be operated by Air Canada Rouge with Boeing 767-300 ER aircraft featuring premium and economy cabins. Flights are timed to optimize connectivity to and from flights within BC and the Pacific North West at Air Canada’s Vancouver hub. All flights provide for Aeroplan accumulation and redemption and, for eligible customers, priority check-in, Maple Leaf Lounge access in Vancouver, priority boarding and other benefits.

Next summer, Air Canada Rouge will operate to London Gatwick from two points across Canada:Â  Vancouver and Toronto.