Qantas and Air France customers will now have more options to travel between Europe and Australia via Asia following a renewed codeshare agreement between the two carriers.Â (2)Â Â

Under the reciprocal deal, Qantas will add its code to flights operated by Air France between Singapore and Hong Kong and Paris-Charles de Gaulle, as a continuation of flights from Sydney, Brisbane, Melbourne and Perth.

The new agreement will see the two airlines codeshare on a total of more than 200(1)Â flights per week. Â

Customers will benefit from more seamless travel experiences with single ticket itineraries and through-checked baggage as well as the opportunity to earn points on the new codeshare services.

– We are very pleased to be re-establishing a partnership with Qantas. Thanks to this agreement, the Air France-KLM group will be able to offer one of the best possible travel solutions for its customers from Europe to Australia. Â It will also deliver a better travel experience for our Business customers, with connections in Singapore and Hong Kong, two of the most popular airports in the world. This new cooperation confirms our group’s desire to expand in the Asia-Pacific region.”

– This is great news for our customers who want to travel to Europe via Asia, giving them another option to get to Paris and more opportunities to earn Frequent Flyer Points. The return of this popular codeshare delivers on our strategy of partnering to provide customers with access to an expanded network and more seamless travel experiences wherever they want to fly.” Â 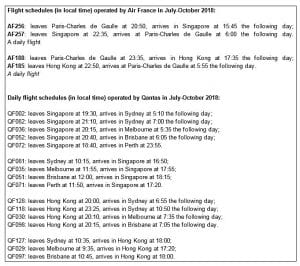