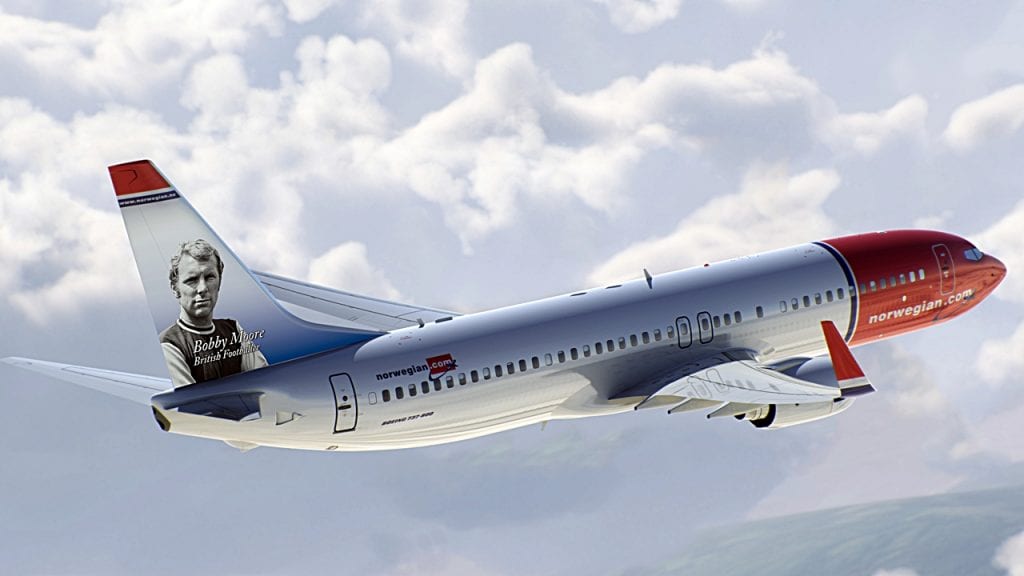 The announcement comes on Football Shirt Friday – the fundraising initiative that helps fund life-saving research into bowel cancer. Returning for the fifth year, people are encouraged to wear their favourite football shirt and donate £2 to the Bobby Moore Fund for Cancer Research UK.

Norwegian has always honoured iconic figures on the tails of its aircraft, featuring personalities who symbolise the spirit of Norwegian through innovation, leadership and inspiring others. To reflect Norwegian’s rapid growth in the UK, where it now flies 5 million UK passengers each year to 50 global destinations, the airline has begun a series of British tail fin heroes. Booby Moore will become Norwegian’s fourth British hero, following children’s author Roald Dahl, pioneering pilot Amy Johnson and aviation maverick Sir Freddie Laker.

Born in Barking, Essex in 1941, Bobby Moore went on to a 25 year career in professional football which established him as one of the world’s greatest footballers of all time and a British national icon. In 1966 Moore captained England to victory in the World Cup with his performances in the 1966 and 1970 World Cups cementing his reputation as an inspirational leader and â€œthe best defender in the history of the game”, according to many.

Just as iconic as Moore lifting the World Cup, are images of him first cleaning his muddy hands before shaking hands with the Queen to collect the trophy. It was one of many acts that underlined Moore’s reputation as a class act and true gentleman, with world-famous footballer Pele saying upon Moore’s death, â€œThe world has lost one of its greatest football players and an honourable gentleman”.

Following his death in 1993, the Bobby Moore Fund was established to raise funds for and public awareness of bowel cancer. Initiatives like Football Shirt Friday have helped raise over £23 million to-date – Norwegian’s UK staff are also being encouraged to wear their favourite football shirts today in honour of the airline’s new tail fin hero.

– As Norwegian continues its rapid UK growth, our ’tail fin heroes’ offer us a perfect chance to pay tribute to some of the greatest Britons of all time. Bobby Moore has inspired generations of people for being an iconic footballer and leader on the pitch and a true gentleman off the pitch, so we are honoured to have him appear on our aircraft.”

– This is such a wonderful way to remember Bobby and to mark Football Shirt Friday. We want to see the whole nation wear their team’s colours with pride today and believe that together we can and will beat bowel cancer. We have made enormous progress in the last 50 years but sadly bowel cancer still kills 44 people in the UK every day. By joining forces, raising funds and channelling that unbreakable spirit of a football fan to support the Bobby Moore Fund, we can all help bring forward the day when bowel cancer is cured.”

The Bobby Moore tail fin will take to the skies later this year and adorn a Norwegian Boeing 737-800 plane. Norwegian operates from five UK airports (London Gatwick, Birmingham, Manchester, Edinburgh and Belfast) carrying over 5 million yearly UK passengers to 50 global destinations, including the UK’s only direct low-cost flights to the US.