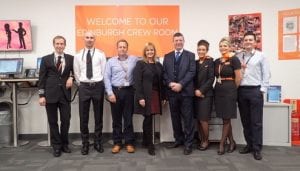 The airline has provided affordable flights with friendly service for the past 20 years and opened its Edinburgh base 15 years ago (picture: easyJet)

Whilst the airline’s first departure from Edinburgh was in November 1995, the airline opened a base at Edinburgh on 28 October 2001. The airline now has eight aircraft based at Edinburgh along with 104 pilots and 314 crew.

easyJet’s first departure after it opened its Edinburgh base in 2001 flew 128 passengers to Amsterdam. Since then, over 280,000 easyJet flights have flown to and from Edinburgh airport, enabling over 37 million passengers to travel across Europe.

– We’re delighted to be celebrating easyJet’s fifteen years basing aircraft and crew at Edinburgh Airport today. More than 3.4 million passengers fly with us every year to and from Edinburgh.

– When we started the airline 20 years ago we had fares to Scotland from Â£29 — or as we advertised at the time, the same price as a pair of jeans.Â  A pair of Levis 501s will now set your back Â£75 while our fares start from Edinburgh start from Â£27.49.

– I have to thank our fantastic customers who travel to and from Edinburgh airport over the past twenty years for their loyalty and support. I would also like to thank our dedicated members of staff in Edinburgh for their hard work and commitment.

– Although today we’re celebrating 15 years of having easyJet aircraft and crew based in Edinburgh, we’re even more excited about the future.Â  We will continue to challenge conventional thinking and we look forward to where the next 15 years takes us.”

– A few years ago easyJet promised to paint Europe orange — well we are now delighted to have helped paint the continent orange with a distinctly tartan trim.

– easyJet are our now biggest carrier here at Edinburgh Airport and we have travelled a great distance with them in a relatively short space of time. In 2001 we handled just over six million passengers — this year we are on course to assist around 12 million passengers.

– The ongoing partnership between Edinburgh Airport and easyJet has been crucial in opening new routes and opportunities for direct connectivity between Scotland and Europe and we look forward with confidence as we continue grow and reach new milestones together.”