Only 3% of commercial airline pilots worldwide are female and only 450 of them have achieved the rank of captain* — which means every female captain could fit onto an A380 aircraft.Â 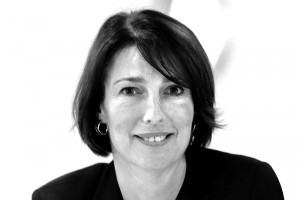 In the year ending September 2015, women made up 6% of easyJet’s new pilot intake and 5% of its total pilot community. Â The airline currently has 164 female pilots in total, of whom 62 are Captains — around 14% of the world’s total.

In October 2015 easyJet launched its Amy Johnson Flying Initiative with the aim of doubling the number of female new entrant pilots to 12% over two years. Â The initiative was really successful with over 600 applicants and so easyJet was able to achieve the 12% target in year one – recruiting 33 female new entrant pilots. These women have either started to fly with easyJet or are assigned to courses due to start in the coming weeks.

Encouraged by this success, easyJet has now set itself a more stretching target of ensuring that 20% of new entrant cadet pilots recruited by easyJet in 2020 are female. Based on current recruitment plans this would mean that easyJet would be recruiting around 50 female pilots a year.

easyJet has a well-established and comprehensive pilot cadet programme, in partnership with leading pilot training providers, which ensures that all cadet pilots, including easyJet’s new female pilots, are trained to the highest standards. 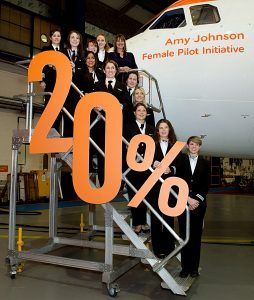 The programme continues to include a rigorous selection process, ground school and initial flight training, simulator training and training specifically for easyJet’s Airbus A320 family fleet. Â On joining easyJet all new pilots also receive the support of its most experienced training Captains, as well as always flying alongside an easyJet Captain with significant flying hours. Â All easyJet pilots continue undergo regular flight checks and ongoing training throughout their career, including command training for pilots who have sufficient experience to progress towards the rank of Captain.

In recognition of the recruitment milestone, easyJet chief executive Carolyn McCall today unveiled an aircraft named after renowned female aviator Amy Johnson. The aircraft will fly across the entire easyJet network to generate awareness of the initiative.

– I am delighted to be unveiling this specially named aircraft after one of the most accomplished female aviators in history.

– 50 years ago almost all professions were dominated by men and over the last five decades there has been significant progress in almost every sector with women entering and attaining senior positions in professions like law, medicine, education, finance and politics. Â However, the proportion has not changed for pilots and it is hard to think of another high profile profession where women are so under-represented.

– We would like to understand why this is and to do what we can to redress the balance. Â We have been encouraged by the success of our Amy Johnson initiative since we launched it in October 2015 and the results so far suggest that the demand from women to become pilots is there.

– In light of us achieving our first target we have set a new target of 20% female new entrant cadet pilots by 2020. Â This means that we will be recruiting around 50 annually which will really start to change the face of our industry. This is a long term strategy, which we hope will eventually lead to easyJet recruiting, retaining and developing many more female pilots.”

– At easyJet we value diversity and we believe that having a workforce which better reflects our customers will help support our future success.

– A career as a pilot is interesting and rewarding and we want more women to bring their skills to the role. Â We have an excellent training department here at easyJet and the opportunity to progress careers to become Captains is much faster than with many other operators.

– I would encourage anyone thinking about starting a career as a pilot to apply. Â It is an excellent opportunity to work for Europe’s leading airline, flying our very modern fleet of aircraft with the latest technology onboard and an excellent safety record.”

Speaking about the role of a pilot easyJet Captain Marnie Munns said;

– I am proud of the work easyJet is doing to promote this hugely rewarding career to girls and young women. Myself and many of my colleagues are highlighting the opportunities of pilot careers to female audiences such as school groups and other youth organisations, building on the work easyJet already does in mentoring young women.

– We also continue to work with easyJet’s pilot training providers to attract more women to apply for the easyJet cadet programmeâ€Ž and will offer another six places this year for women through the Amy Johnson initiative.”

– I am delighted that easyJet has made such great progress in recruiting female cadet pilots through the Amy Johnson initiative, and that they have even higher ambitions for the coming years. Â The Government is committed to increasing the number of women employed in the transport sector and to ensuring that there are no glass ceilings for anyone when it comes to fulfilling their full potential in their careers.”

– We want people to have the opportunity to take on whatever career they want in life and not be held back by the idea that there are â€˜jobs for girls’ and â€˜jobs for boys’. Women are still hugely underrepresented in the aviation sector and that’s why this initiative is so important.

– We have made fantastic progress on this issue in recent years — we now have the lowest gender pay gap on record and will be requiring employers to publish their gender pay and bonus gaps for the first time from next April. But we still need more businesses to follow easyJet’s example by tackling gender stereotypes and attracting women into their professions.

– The benefits of helping women to unlock their talents are huge — eliminating work-related gender gaps could add Â£150 billion to our annual GDP in 2025 and that’s an opportunity that neither Government nor business can afford to ignore.”

– I welcome such an encouraging and positive initiative by the industry. The fulfilment of easyJet’s target for female pilots shows that, with commitment, we can drive change and make the transport sector more balanced to the benefit of all. I invite stakeholders to engage proactively in similar initiatives, and with my team we plan to provide a platform to share such good practices at EU level.”

easyJet has worked hard to create an environment where women have the opportunity to build careers throughout the organisation. Â The airline encourages and supports women as they progress and tries to make it easier for people to have flexible working including part-time working, working from home and job sharing.