The arabianÂ  airline EmiratesÂ will launch a new daily route from Dubai (DXB) to London Stansted (STN) on 8 June, 2018. With its strategic position close to the tech and pharma hubs of Cambridge and Peterborough, Emirates will be the first Middle Eastern airline to operate out of the popular North East London airport. 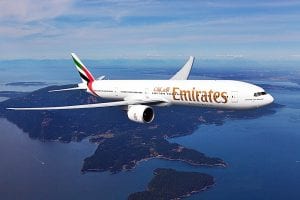 The daily route will be operated by the airline’s new three-class Boeing 777-300ER offering customers six seats in First Class, 42 in Business Class and 306 in Economy Class. The aircraft is fitted with its game changing, fully enclosed private suites in First Class, as well as refreshed Business and Economy Class cabins.

Opening the London Stansted gateway was a strategic decision by Emirates to serve the thriving business community in London’s north east and the wider 7.5 million population that fall within its catchment area. Hong Kong, Dubai, Shanghai, Singapore and Mumbai are the most popular business destinations from the East of England, which Emirates serves daily through its Dubai hub. Leisure travellers can enjoy direct, daily services to Australia, New Zealand, Thailand, Bali and the Indian Ocean islands.

More than 25 of the world’s largest corporations have established operations in the wider Cambridge and Peterborough area, with Airbus, Astra Zeneca and GSK amongst the multi-national companies based there. Such businesses have helped establish the London Stansted Cambridge Corridor as one of the top five global knowledge regions, alongside world-leading San Francisco, Silicon Valley and Boston.

With the introduction of the London Stansted daily service, there will be 10 Emirates flights daily, connecting Dubai and London. Passengers can also fly to London Heathrow and Gatwick. London Stansted Airport is one of the capital’s major airport serving London, as well as the wider regions of England’s South East and the Midlands. The airport is connected to London via the Stansted Express which operates a regular daily service to London Liverpool Street Station. The train takes only 47 minutes and passengers arrive in the heart of the City of London, from where they can then connect to regional trains and the London Underground.

-Â The introduction of the new London Stansted-DubaiÂ service underscores our commitment to serve London, with operations soon to three different airports in the city. There is a clear demand for this service from both business and leisure travellers and we anticipate that this news will be warmly received both across our global network, as well as by the business community based in the Stansted catchment area. We look forward to facilitating even more tourism and commerce opportunities to and from London with these new air transport links, and to providing our customers with the award-winning Emirates experience.”

-Â We’re delighted that Emirates has recognised the strength of London Stansted’s catchment and the opportunity that our available runway capacity gives them to continue growing in the South East of England over the next decade.

– At this crucial time, the new Emirates services will provide an important boost to the UK economy by strengthening international connectivity and offering greater choice and convenience for passengers travelling to long haul destinations. London Stansted has seen significant capital investment and growth since its acquisition by MAG in 2013 and we’re looking forward to working with Emirates as we move forward with the next phase of development of the airport and its network of destinations.”

Stansted airport will also be vital for Emirates’ SkyCargo, the freight division of Emirates and the world’s largest international cargo airline, due to its large cargo handling capabilities. The carrier connects cargo customers to over 154 cities across 84 countries in six continents and flies 140,000 tonnes of cargo in and out of the UK in an average year.

The new gateway will be the seventh UK airport that Emirates operates out of in the UK; other locations include London Heathrow, London Gatwick, Birmingham, Newcastle, Manchester and Glasgow.