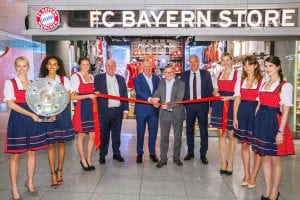 – With FC Bayern and Munich Airport, two partners have joined forces that both play at the top level of their respective Champions Leagues.”

Uli Hoeness was delighted with the new store:

– This new location puts FC Bayern in the shop window at the world’s most beautiful airport.”

– With this impressive presence right next to the gates in TerminalÂ 2, FC Bayern can attract both hometown and international fans with its apparel, memorabilia and souvenirs.”