The Lufthansa Group has taken delivery of its first A350 XWB, the world’s newest and most efficient twin engine widebody airliner. The aircraft is the first of 25 A350-900s that Lufthansa has on order. Lufthansa will deploy their first A350s on long-haul routes from Munich to Delhi and Munich to Boston. 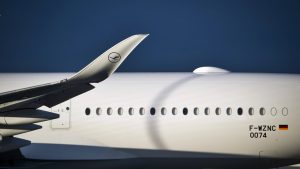 Powered by Rolls-Royce engines, Lufthansa’s A350 XWB will feature a comfortable three-class cabin layout with 48 seats in Business, 21 seats in Premium Economy and 224 seats in Economy. The A350 XWB is equipped with Lufthansa’s latest cabin products including new seats, an all-new inflight entertainment experience and, for the first time, inflight connectivity, offering new levels of comfort and convenience to Lufthansa’s passengers in all classes.

The A350 XWB features the latest aerodynamic design, carbon fibre fuselage and wings, plus new fuel-efficient Rolls-Royce engines. Together, these latest technologies translate into unrivalled levels of operational efficiency, with a 25 per cent reduction in fuel burn and emissions, and significantly lower maintenance costs. The spaciousness, quietness, beautiful interior and mood lighting in the cabin contribute to superior levels of comfort and well-being, setting new standards in terms of flight experience for all passengers.

To date, Airbus has recorded a total of 810 firm orders for the A350 XWB from 43 customers worldwide, already making it one of the most successful widebody aircraft ever. 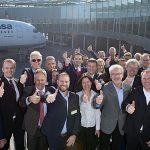 Airbus and Lufthansa marked a key milestone on 21 December 2016 with handover of the German flag carrier’s first A350-900, which will be based in Munich (Photo: Â© A. Doumenjou/master films) 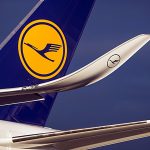 The first A350-900 for Lufthansa is equipped with this operator’s latest cabin products, including new seats, an all-new in-flight entertainment experience and — for the first time — in-flight connectivity (Photo: Â© GOUSSE Herve – MasterFilms) 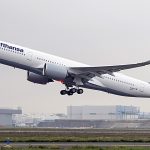 German flag carrier Lufthansa’s first A350-900 jetliner — which has 293 seats in a three-class configuration — takes off for its milestone maiden flight in November 2016 (Photo: Â© A. Doumenjou/master films)