Embraer and Widerøe, Scandinavia’s largest regional airline, celebrated the delivery of the manufacturer’s first production E190-E2Â  at a ceremony at Embraer’s facility in SÃ£o José dos Campos. The Norwegian airline will start flying the new aircraft on domestic routes later this month.

The E190-E2 is the first of three new-generation aircraft seating from 80 to 146-seat E-Jets to be introduced through 2021. Widerøe’s E190-E2 is configured with 114 seats in a single-class layout. Widerøe has contracted for up to 15 E-Jets E2s – three firm E190-E2 orders and purchase rights for an additional 12 E2s. The total value of the order is approximately USD 873 million if all rights are exercised.

– The E190-E2 is an impressive aircraft. It is the ideal airplane for Widerøe as we introduce jets for the first time in the company’s 84-year history, said Stein Nilsen, Chief Executive Officer of Widerøe.

– I am convinced our passengers are going to love the cabin, our operations people are going to embrace the new technology, while our financial collaborators will appreciate the economics the aircraft permits. I believe everyone is going to celebrate with, as the launch customer, the fact that we are the first airline to fly the world’s most environmentally-friendly airplane. With the lowest noise and emissions among aircraft in its category.”

– This is a historic day for the E-Jets program and for Embraer. The delivery of this E2 marks a continuation of a real success story in global aviation. I’m honored that Widerøe – such a respected and experienced airline – is our launch operator said John Slattery, President & CEO, Embraer Commercial Aviation.

– I’m also delighted to welcome Widerøe as our newest Embraer customer and want to thank Stein and his team for the support over the last year; working together with us as partners to deliver this airplane today. I’m planning on being on the aircraft when it first enters Norwegian airspace next week and really looking forward to that!” 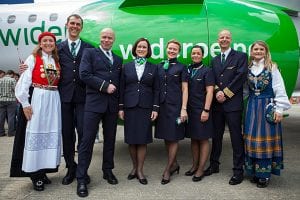 The E190-E2 features new ultra-high bypass ratio engines and a completely new wing and landing gear. Compared to the first-generation E190, 75% of the aircraft systems are new. Embraer recently announced some final flight tests results confirming the E2 as the most efficient single-aisle aircraft on the market.

In fuel consumption, the E190-E2 proved to be 1.3% better than originally expected, a 17.3% improvement compared to the current- generation E190. The E190-E2 is also the aircraft with the lowest level of external noise and emissions in the segment. Flight test results also confirmed the E190-E2 to be better than its original specification in takeoff performance.

The E190-E2 will also have the longest maintenance intervals among single-aisle aircraft with 10,000 flight hours for basic checks and no calendar limit for typical utilization. This means an additional 15 days of aircraft utilization over ten years compared to current generation E-Jets.

Another key gain is with pilot transition training time. Pilots of current-generation E-Jets will need only 2.5 days of training and no full flight simulator to be qualified to fly an E2. Widerøe’s E190-E2 fleet will have the support of the Flight Hour Pool Program which covers more than 300 key rotable components.

Embraer’s Flight Hour Pool Program, which currently supports more than 40 airlines worldwide, is designed to allow airlines to minimize their upfront investment in expensive repairable inventories and resources and take advantage of Embraer’s technical expertise and vast component repair service provider network. This results in significant savings in repair and inventory carrying costs, reduction in required warehouse space, and the elimination of resources required for repair management, all while providing guaranteed performance levels.

Embraer is the world’s leading manufacturer of commercial jets with up to 150 seats. The Company has 100 customers from all over the world operating the ERJ and the E-Jet families of aircraft. For the E-Jets program alone, Embraer has logged more than 1,800 orders and 1,400 deliveries, redefining the traditional concept of regional aircraft by operating across a range of business applications.