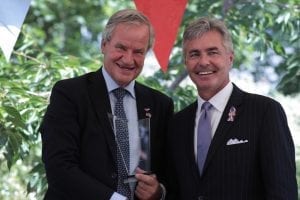 -I congratulate Bjørn Kjos on receiving the 2018 U.S. Ambassador’s Award for his work to strengthen people-to-people and economic ties between the United States and Norway, one trans-Atlantic passenger and one American-made airplane at a time, said Ambassador Braithwaite.

– It is an honor to receive this award. I am grateful that the work we have done in the U.S. so far is appreciated and acknowledged. No other foreign airline is more committed to the United States than Norwegian, and this is stillÂ just the beginning, saidÂ Bjørn Kjos.

– The hundreds of thousands of tourists and other visitors that Norwegian have carried between the U.S. and Europe, has led to thousands of jobs being created and has boosted local economies on both sides of the Atlantic. We will do our best to continue contributing towards more job creation and strengthening the ties between our countries, Bjørn Kjos continued.

Norwegian began flying to the U.S. in 2013 and support from the U.S. has been vital for Norwegian in its mission to offer more affordable fares to the American people and the possibility to travel internationally. Today, Norwegian offers close to 60 nonstop routes from the U.S. to Europe; more transatlantic routes than any other European airline.

Norwegian has a strong relationship and commitment to the world’s leading aircraft manufacturer, Boeing. Back in 2012, the airline signed the largest ever aircraft order in European history with Boeing. Norwegian still has more than 100 U.S.-made Boeing aircraft on order.

Today, Norwegian has around 800Â dedicated colleagues based across several locations in the U.S. — a number that will continue to grow quickly. Norwegian is the only foreign airline hiring U.S.-based pilots, bringing many American pilots back home. Norwegian also employs more U.S.-based cabin crew than any other foreign airline. Earlier this year, Norwegian opened its fifth U.S. base, at LAX, proving Norwegian’s commitment to the US. The airline also has bases in New York, Fort Lauderdale, Providence and Stewart.

Gratis aktiviteter for barnefamilier i Lisboa