Norwegian Cruise Line took this week delivery of the 167,800-gross-ton Norwegian Bliss, from MEYER WERFT during a ceremony in Bremerhaven, Germany, marking the conclusion of an 18-month building period. 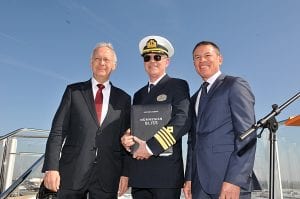 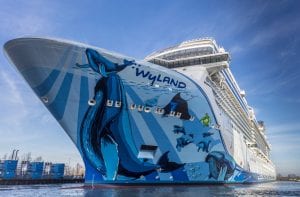 Later the ship cruised to Southampton, England where she will begin her transatlantic journey on April 21. Norwegian Bliss will arrive to her first homeport at Pier 66 in Seattle, Washington on May 30, where the official christening ceremony will take place. When she returns on June 2, she will embark on her first seven-day voyage to Alaska.

– Norwegian Bliss is one of our most highly-anticipated ships to date, and today marks another exciting milestone for the newest and most innovative ship of our young and modern fleet, said Andy Stuart, president and chief executive officer of Norwegian Cruise Line.

– The MEYER WERFT team, along with our operations teams, ship officers and crew members, has done an incredible job bringing Norwegian Bliss to life and we cannot wait for guests to experience all she has to offer.”

– We are extremely proud of our partnership of over 15 years and are confident that the first ship custom-built for cruising to Alaska will exceed the expectations of their guests.” 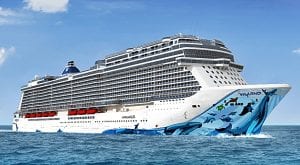 Norwegian Bliss, the third ship in the line’s Breakaway Plus class, the most successful class in the company’s history, is the first cruise ship specifically designed with features and amenities for the ultimate Alaska cruising experience.

Beginning June 2018, Norwegian Bliss will spend her summer cruising seven-day voyages to Alaska, and fall season cruising to the Mexican Riviera from Los Angeles. In winter of 2018, she will sail the Caribbean from Miami, and in the 2019 fall/winter season she will cruise from New York City to Florida, the Bahamas and Caribbean.