Norwegian will bring its popular French Caribbean flights to French Caribbean later this year. Starting December 17, flights will operate between South Florida and Guadeloupe twice weekly on Wednesdays and Saturdays. Due to high demand, Norwegian will also add a fourth weekly service from New York’s John F. Kennedy International Airport to Guadeloupe as of December 17. 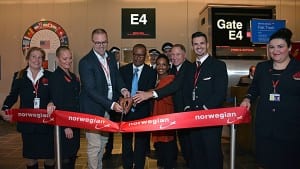 The addition service to Guadeloupe marks the airline’s sixth nonstop route from Fort Lauderdale, where Norwegian already operates flights to Copenhagen, London, Oslo and Stockholm and will launch direct service to Paris on August 4. Overall, it will be Norwegian’s 41st route from the U.S.

– We are very excited to add our seventh route from the United States to the French Caribbean, this time from Florida. Norwegian will now be able to offer Floridians a much more affordable and comfortable way to reach the French Caribbean, or if they wish to travel onwards to any of the nearby islands,” said Thomas Ramdahl, Chief Commercial Officer, Norwegian.

– We are thrilled about the increase of service from New York and the newnonstop flightsfrom Fort Lauderdale to Guadeloupe. An airline operating non-stop flights to Pointe-Ã -PÃ®tre from four different cities in the US is just unprecedented. The best kept secret of the Caribbean has been clearly revealed thanks to Norwegian and we are delighted that Americans are falling for our French Caribbean Flair,” said Sandra Venite, USA Director for the Guadeloupe Islands Tourist Board.

Flights to Guadeloupe are now available for purchase at norwegian.com/us, with fares as low as $79 one-way, including taxes. The lowest available fares to the French Caribbean and any of Norwegian’s destinations can be found by reviewing the low fare calendar.