NorwegianÂ is continuing its global expansion today by launching the UK’s first low fare route to Texas, with the only non-stop service from London Gatwick to Austin, Texas. The new route to the US comes just two days after the airline launched the UK’s cheapest nonstop flights to Chicago on 25thÂ March. 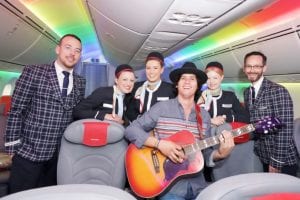 Music was in the air today at London Gatwick as passengers on the inaugural flight experienced the sounds of Austin before they took off. The Live Music Capital of the World is famed for its live music and to celebrate the first flight from London Gatwick to Austin, passengers enjoyed a live acoustic performance from local Austin artist Julian Acosta on the ground and in the skies before landing in Austin.

–Â We are excited to offer passengers the only direct route from London Gatwick to Austin, the Live Music Capital of the World. Our high-quality flights give both leisure and business travellers the chance to explore this vibrant city.”

– As we expand our high-quality services to the USA from London Gatwick, we will continue offering consumers greater choice and affordable fares when flying Norwegian”

-Â This service – Norwegian’s second new long-haul route to launch from Gatwick in the space of a week – connects our passengers to a particularly exciting new destination and famous cultural hub. Austin has so much to offer British tourists, including the incredible live music scene with which it has become synonymous. We’re delighted that our passengers can now take advantage of a direct route to this remarkable city — which is one of more than 60 in Gatwick’s flourishing long-haul network.”

– The new service from Gatwick Airport will provide opportunity for additional visitors connecting from throughout the world and from the U.K.,Â said Tom Noonan, President and CEO of Visit Austin.Â

– With year over year increases in visitors from the U.K. and beyond, we anticipate this flight will be very successful. The addition of this route is also a direct reflection of how our city continues to evolve as a premier destination for travellers.”

Austin will be Norwegian’s 13thÂ long-haul route launched from London Gatwick in the past four years. Norwegian is the second largest long-haul airline at London Gatwick* with 13 non-stop long-haul routes following the launch of Singapore in September 2017, Buenos Aires in February and Chicago and Austin in March 2018.