Norwegian was today named the â€˜World’s Best Low-Cost Long-Haul Airline’ for the second consecutive year and â€˜Best Low-Cost Airline in Europe’ for the fourth year in a row at the renowned Skytrax World Airline Awards. 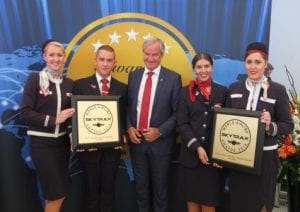 Skytrax is the leading international airline rating system as voted on by the travelling public who evaluated more than 280 airlines worldwide.

Norwegian began operating low-cost long-haul routes between the United States and Europe in 2013 and currently offers 40 nonstop transatlantic routes and flies to more than 100 European destinations. Passengers have voted Norwegian the â€˜Best Low-Cost Airline in Europe’ since 2013 at the Skytrax awards, and have also selected Norwegian as the â€˜World’s Best Low-Cost Long-Haul Airline’ twice in a row since the award was first introduced in 2015.

Norwegian CEO Bjørn Kjos and crewmembers from the airline’s London Gatwick base accepted the Skytrax awards earlier today at the Farnborough Air Show.

– I am honored to accept these awards, but this recognition belongs most of all to Norwegian’s hard-working staff and our loyal passengers. These awards give us huge momentum as we continue our ambitious expansion plans in Europe, the U.S. and beyond,” said Mr. Kjos.

– We not only believe that air travel should be affordable for all, but we also believe that low-cost can still mean high-quality. It is truly rewarding to see that our brand new planes, expansive route network, low fares and the great service offered by our crew have been appreciated by passengers.”

– Norwegian’s growth within Europe and on its long haul network continues to win new admirers and this is reflected in the airlines success here at the World Airline Awards,” Edward Plaisted, CEO of Skytrax said.

– Europe remains the most competitive region for low-cost airlines and to secure this award as the Best Low-Cost Airline in Europe on a fourth occasion is a truly remarkable achievement.”