NorwegianÂ was named the â€˜World’s Best Low-Cost Long-Haul Airline’ for the third consecutive year and the â€˜Best Low-Cost Airline in Europe’ for the fifth year in a row at the renownedÂ Skytrax World Airline Awards.

Norwegian secured two major awards at the 2017 Skytrax World Airline Awards, the leading international airline rating system as voted on by the travelling public who evaluates airlines worldwide. For the third year in a row, passengers have voted Norwegian the “World’s Best Long-Haul Low-Cost Airline” and for the fifth year in a row theÂ “Best Low-Cost Airline in Europe.”

– It is such an honor that so many passengers have once again voted for us, it means a lot. This would never be possible without the hard-working and dedicated colleagues we have at Norwegian. We believe that air travel should be affordable forÂ all, while at the same time offering a high-quality product. It is truly rewarding to see that our brand new planes, expansive route network, low fares and the great service have been appreciated by passengers. I can assure all of our customers that we won’t rest on our laurels;Â these awards give us huge momentum as we continue our ambitious expansion plans in Europe, the United States and beyond,” said Norwegian’s CEO Bjørn Kjos.

Norwegian’s Chief Commercial Officer, Thomas Ramdahl, the Chairman of Norwegian’s Board, Bjørn Kise, and crewmembers from the airline’sÂ bases in Paris, Oslo and Gatwick accepted the Skytrax awards earlier today at the Paris Air Show. 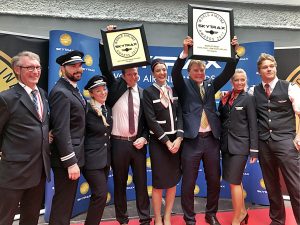 Commenting on the award, Edward Plaisted, CEO of Skytrax said;

– Norwegian has been one of the most consistent performers in the World Airline Awards over the last five years. It has been successful not only in keeping ahead of its low-cost rivals in the annual survey, but also improving its position amongst full-service carrier. This underlined by its position in the top 30 airlines globally. An excellent achievement for an airline that is still rapidly expanding.”

Read more news about Skytrax HERE and about Norwegian HEREÂ

The World Airline Awards are the most recognised accolades for the airline industry, often referred to as “the Oscars of the aviation industry,”Â and are a global benchmark of airline excellence. Travelers across the globe take part each year in the world’s largest airline passenger satisfaction survey to decide the winners. Skytrax Survey and Awards Methodology is fully transparent, and the processes remain 100% independent. Customers judge everything from the experience during check-in, boarding, seat comfort, to cleanliness in the cabin, food, drink, entertainment and service.