Norwegian hasÂ announced that it is increasing frequencies on routes from New York to Dublin, Edinburgh and Shannon and from Providence to Dublin beginning winter 2018. The newly added flights will give travelers more options for affordable flights to Ireland and Scotland. 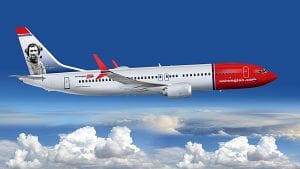 Last summer, Norwegian launched a series of transatlantic routes from New York’s Hudson Valley and Providence, Rhode Island to Belfast, Cork, Dublin, Edinburgh and Shannon. The airline operates brand new Boeing 737-8 MAX aircraft on these routes and was the first to fly this aircraft to and from the United States. which have a capacity of up to 189 seats.

– We’re giving passengers on both sides of the Atlantic more affordable choices, so we’re delighted to increase the number of flights that brings the U.S. East Coast closer to Ireland and Scotland this winter.”

Beginning October 28, Norwegian will increase the frequency on its Providence to Dublin route to a daily service from five weekly flights. On routes from New York to Edinburgh and Shannon, service will be increased to daily from four weekly and three weekly flights, respectively. Additionally, Norwegian will continue its double daily service from New York to Dublin through the winter season.

Norwegian’s flights from Providence to Cork, Edinburgh and Shannon have been adjusted to a summer seasonal service due to lower demand during the winter season. Flights will continue through October and return in 2019. The airline is also the only carrier operating nonstop service from the U.S. to Belfast, a summer seasonal route from New York, which is planned to return in summer 2019.