Norwegian has expanded its North American footprint to include Canada, as the airline’s inaugural flight departed today from Montréal-Pierre Elliott Trudeau International Airport to Guadeloupe’s Point-Ã -PÃ®tre International Airport in the French Caribbean. The new non-stop service will be followed by flights to Martinique Aimé Césaire International Airport on November 1. Both flights will operate three times a week until the end of March 2019, with fares starting as low as C$179 one-way, including taxes. 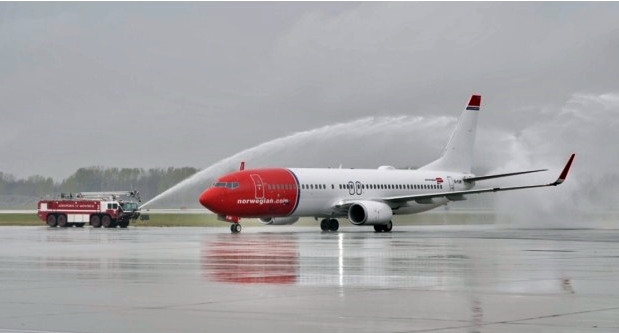 Norwegian will also launch its first Canadian transatlantic service with year-round, daily service from Hamilton to Dublin on March 31, 2019. Fares to Ireland start as low as C$249 one-way, including taxes. All fares are now available for sale on Norwegian’sÂ CanadianÂ andÂ AmericanÂ websites. Additionally, the website’sÂ Low fare calendardisplays the lowest available fares to all of Norwegian’s destinations.

– This is an important milestone for Norwegian as we enter one of the world’s most exciting aviation markets, Canada. We believe our low fares matched with our high quality and award-winning service will be very popular among Canadian travelers, as it has been with American travelers for the past five years. We are now the only airline to connect the French Caribbean with both Canada and the United States, as well as French Guiana, which is also launching this week, said Bjørn Kjos, Norwegian’s Founder and CEO.

– For Canadians and especially Quebeckers, the islands of Guadeloupe represent a paradise destination they would like to visit at least once in their life. We are thrilled about Norwegian’s new route from Montreal to Pointe-Ã -PÃ®tre as they will contribute to realize this dream. We are looking forward to welcoming more Canadians to our archipelago, said Willy Rosier, General Director for the Guadeloupe Islands Tourism Board.

– The Martinique Tourism Authority welcomes the new service by Norwegian between Montréal and Fort-de-France. This service, which also opens an extension to French Guiana, is an exceptional opportunity to develop traffic from Montreal. The vibrant culture of Martinique, its culinary treasures, its Grand Rums, diverse activities, breathtaking landscapes and its legendary hospitality make Martinique a destination of choice for our Canadian guests. With a 49% growth already registered for the upcoming season, the Canadian market is more than ever a priority for Martinique,” said Karine Mousseau, Commissioner, Martinique Tourism Authority.

– We are happy and very proud that Norwegian chose Montréal for its first commercial flight on Canadian soil. Sun destinations are popular with Montrealers and the addition of Pointe-Ã – PÃ®tre, as well as Fort-de-France in a few days, will enable travellers to benefit from a greater choice at a low cost from YUL,” said Philippe Rainville,Aéroports de Montréal President and Chief Executive Officer.

airBaltic passengers up +19% in January 2020
Britannia i verdensklasse