America’s beloved and most famous literary icon, Mark Twain (1835 – 1910) is the latest hero to join Norwegian’s growing roster of historic figures showcased on its tailfin. Renowned the world-over for his novels including â€œAdventures of Tom Sawyer” and â€œAdventures of Huckleberry Finn,” Twain’s literary works remain timeless classics still enjoyed today. 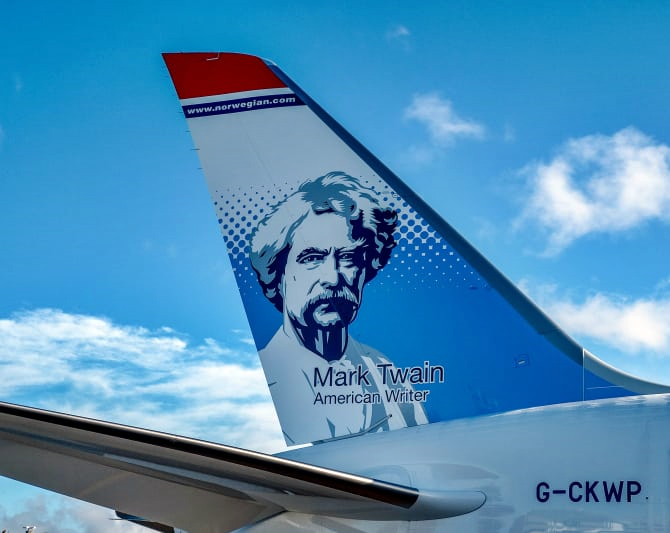 Born Samuel Langhorne Clemens in 1835, he took on the pseudonym â€˜Mark Twain’ during his time as a river pilot, which is a river term for â€˜it’s safe to navigate.’ Twain established himself as writer, humorist, entrepreneur, publisher and lecturer in his lifetime and was an avid world traveler. He joins recently spotlighted American tailfin heroes including Babe Ruth, Clara Barton, Sojourner Truth and Benjamin Franklin. Each of these figures share Norwegian’s vision of pushing boundaries, inspiring others and challenging the status quo.

– Mark Twain’s legacy and his body works embody the spirit of curiosity, change, and adventure. We selected him as the next American tailfin hero to honor as we continue to inspire wander lust for the everyday person with our accessible fares and modern aircraft, Matthew Wood, Senior Vice President Long-Haul Commercial, Norwegian.

Mark Twain’s image is currently featured on a Boeing 737-MAX 8 and delivered last week, a new 787-9 Dreamliner — both flying from the U.S. to Europe and beyond. The new aircraft joins Norwegian’s ever-growing fleet of young, fuel-efficient airplanes. In fact, Norwegian was recently named the most fuel-efficient airline by The International Council for Clean Transportation, twice.

Since its founding, Norwegian has celebrated iconic and historical figures on the tails of its aircraft, it is now a recognized industry signature.