Ryanair Â warmly welcomed the initiatives taken by the Government of Prime Minister Matteo Renzi to reverse the â‚¬2.50 municipal tax increase from 1 Sept 2016, and Minister Graziano Delrio’s revised airport guidelines, which will enable Italy’s regional airports to compete on a level playing field with airports in Rome and Milan as long as they comply with the EU’s MEIP rules. These initiatives have now allowed Pescara airport to reach a new growth agreement with Ryanair, which will now reverse the previously announced closure of the Pescara base in november.

Ryanair also announced in response to these initiatives by Prime Minister Renzi and Minister Delrio, that it will accelerate its growth plans for the Italian market in 2017 which will see record investment and growth by Ryanair in Italian tourism as follows: 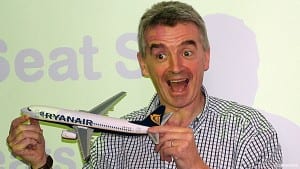 – We are extremely grateful to Prime Minister Renzi and Transport Minister Delrio for taking these initiatives to grow Italian tourism. All of this growth would have been lost to other EU countries if the Municipal Tax increase had not been reversed, and the airport guidelines had not been redrafted to comply with EU rules.

– Minister Delrio has challenged the airlines to respond with growth, if his Government acted to improve the competitiveness of Italy’s airports, and Ryanair is pleased to be the first airline to announce this record $1 billion investment in new aircraft, new routes, new traffic and job growth in Italy in 2017. We will also reverse our previously announced base closure in Pescara for W16 and these flights will go on sale later this week on www.Ryanair.com.

– We remain in negotiations with Alghero airport and are hopeful of concluding a similar agreement with them when they conclude their current privatisation project in early September, which may allow the Alghero base to reopen in late November.Â

– By opening over 40 new routes and by investing over $1 billion in new aircraft and new jobs in Italy in 2017, Ryanair expects to deliver record traffic growth, up from 32m in 2016, to over 35m in 2017. These 3m new customers will enjoy Ryanair’s great low fares and our â€œAlways Getting Better” customer experience as we bring millions of new visitors to Italy for great summer sun, city breaks and winter sport holidays.

– To celebrate this record Italian growth we are releasing 100,000 seats for sale from just â‚¬8, which are available for booking until midnight Thursday (18 Aug) for travel in October and November. Since these amazing low prices will be snapped up quickly, customers should log onto www.ryanair.com and avoid missing out.”

– The Italian Government keeps on working on the compliance with the EU rules, we are committed to develop services to citizens and to foster opportunities for investors. We welcome the 2017 industrial plan of Ryanair setting up more flights, increasing opportunities for tourism in Italy and especially new job opportunities.”

– The development of air transport represents a primary objective for the economic growth in our country. The times we are living in require a European perspective rather than a national one, especially for air transport and its regulations, always respecting fair competitiveness and passengers’ rights.Â