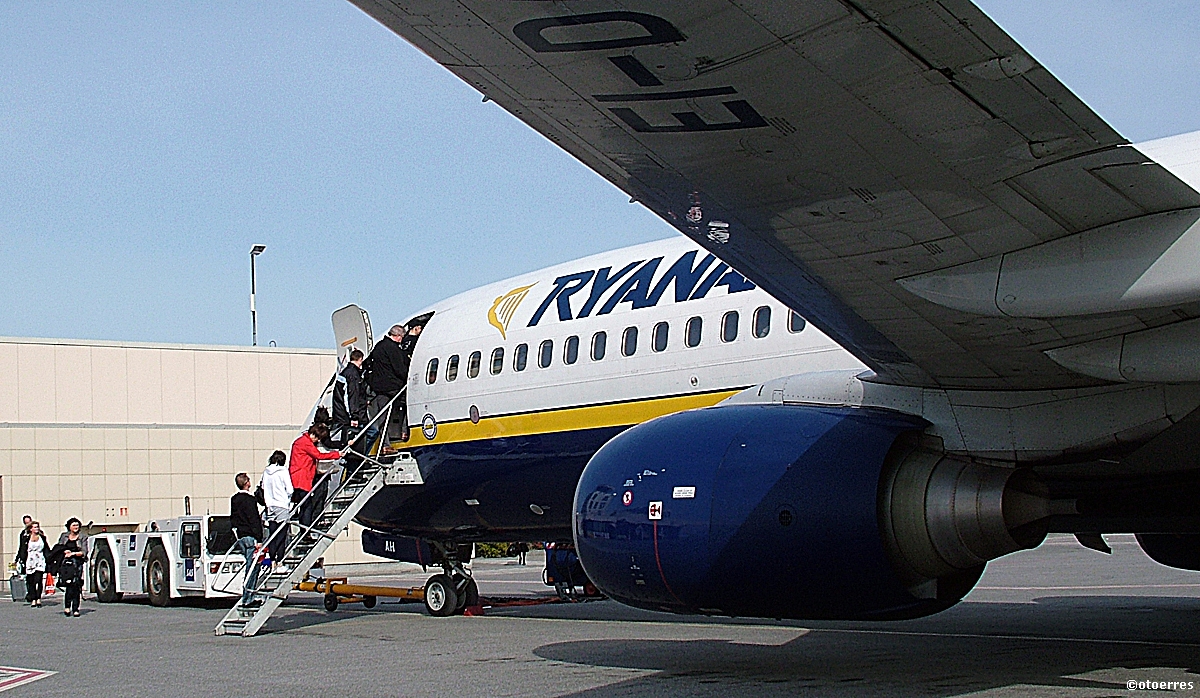 – As recently guided, H1 average fares fell by 3%.Â  While ancillary revenues performed strongly, up 27%, these were offset by higher fuel, staff and EU261 costs. Our traffic, which was repeatedly impacted by the worst summer of ATC disruptions on record, grew 6% at an unchanged 96% load factor.

– We took delivery of 23 new B737s in H1 (bringing the fleet to 450) and launched over 100 new S.18 routes.Â  We have trimmed winter capacity by 1% (including base closures in Eindhoven and Bremen) in response to weaker fares and higher oil prices. We expect FY19 traffic will grow to 141m (incl. 3m Laudamotion).Â  As we look beyond this winter, we have announced new S.19 bases in Bordeaux, Marseille, London Southend and increased capacity in Luton.Â  We plan to operate over 100 new routes in S.19.Â

– With spot fuel reaching $85bbl, rising interest rates and the stronger US dollar, airline margins are under pressure and it is inevitable that more of the weaker, unhedged, European airlines will fold this winter.Â  In recent weeks Skyworks (Switz.), VLM (Bel.), Small Planet & Azur Air (Ger.), Cobalt (Cyprus) and Primera Air (Stansted & Scandinavia) collapsed.Â  At the same time, many larger airlines are closing bases and cutting routes to minimise winter losses.Â  We expect more failures this winter and we cannot rule out further capacity cuts or base closures in Ryanair if oil prices rise or air fares fall further. Over the medium term, this consolidation will create growth opportunities for Ryanair’s lowest fare/lowest cost model.Â

– In August, we increased our holding in Laudamotion to 75%.Â  Despite a very difficult first summer, Laudamotion will carry almost 3m guests this year but will lose approx. â‚¬150m in start-up Year 1 exceptional costs.Â  We are working closely with the Laudamotion team who recently launched their S.19 schedule which will see them grow their fleet to 23 aircraft (including 19 A320’s).Â  Laudamotion have reached agreement to return 9 expensive lease aircraft to Lufthansa this winter and will replace those with lower cost, longer term, operating lease aircraft, which are readily available at competitive terms as more Airbus operators fail.Â  We are assisting them to improve cost control, fuel hedging and fleet management which will deliver significantly higher revenues and much lower costs next year as the airline moves towards break-even in its 2ndÂ year of operation.

– Our investment in Labs continues to deliver strong ancillary revenue growth.Â  In H1 ancillaries increased by 27% to â‚¬1.3bn and drove an 8% increase in total revenue to â‚¬4.8bn.Â  Key drivers of this growth were improved conversion of priority boarding and reserved seating.Â  Membership of â€œMyRyanair” has increased to 50m members and the Ryanair digital platform now welcomes over 1bn visits p.a.Â  A major upgrade of our digital platform is underway (website, app & 3rdÂ party ancillary product plug-in) which will facilitate improved personalisation and capacity for traffic growth to 200m p.a. as we rollout relevant ancillary products which fit to each individual customer’s profile and buying patterns.

– No other EU airline can match, or come close to, Ryanair’s lowest unit costs and this cost gap is widening.Â  Airports across Europe are incentivising Ryanair’s reliable traffic growth. As others fail, these incentives are improving. Thanks to our balance sheet strength, our fuel is better hedged than most European competitors with 90% of our 12 month needs (to end Sept. 2019) hedged at approx. $68bbl, well below current spot prices of close to $85bbl.Â  FY19 is a year of investment in our people, our systems and our business as we prepare to grow to 200m guests p.a. In H1 ex-fuel unit costs increased by 7%. This includes 20% pay increases for pilots, investment in engineering headcount, pilot/cabin crew training costs and, regrettably, elevated EU261 costs arising from repeated ATC strikes/disruptions. Next spring, we take delivery of our first B737-MAX-200 â€œgamechanger” aircraft.Â  These planes have 4% more seats, yet are 16% more fuel efficient, have 40% lower noise emissions, are hedged at an average â‚¬/$ rate of $1.24 (for 210 aircraft out to FY24) and they will drive continuous unit cost reductions over the next 6 years.

– Repeated ATC strikes/staff shortages means that 2018 will be the worst year on record for European ATC disruptions. These have caused widespread damage to airline punctuality and schedules.Â  Ryanair’s H1 on-time fell to 75% from 86% (prior year), with all of this 11% decline due to ATC strikes and ATC staff shortages.Â  We’ve invested heavily to ensure that everything we control is delivering on-time departures.Â  We have changed our handling provider at Stansted to ensure that we receive dedicated passenger and aircraft handling, and eliminate the short staffing we suffered at times in Stansted this summer. Ryanair and other airlines have initiated legal action against the French Government to keep Europe’s skies open during French ATC disruptions.Â  A4E (Airlines for Europe) and Ryanair are also campaigning for the European Commission to take control of the EU air space so that overflights are not disrupted during national ATC strikes.Â  This does not alter or constrain any individual’s â€œright to strike” but tries to confine the impact of these ATC strikes to the actual country where the strike occurs.Â  We continue to call for urgent action from the EC to reduce ATC disruptions in S.19.

– Since Ryanair agreed to recognise unions in December 2017, we’ve made good progress with our union negotiations in major markets including agreements with pilot and cabin crew unions in Ireland, Italy, the UK,Â Germany (cabin crew) and last week an agreement with our Portuguese pilots.Â  We continue to engage with unions in our other major markets.Â  Progress has been slower in other markets such as Spain & Portugal (cabin crew) and Germany (pilots) where competitor employees have interfered to delay agreements with our people and their unions.Â  While we suffered a small number (just 8 days) of limited strikes this summer, we worked well to minimise disruptions to our customers by operating over 90% of our schedules on each of these days, thanks in large measure to the efforts of the majority of pilots and cabin crew who did not support these disruptions and worked normally.Â  Ryanair has shown over the past 10 months that we can, and will, work with unions to reach fair and reasonable agreements for our people while retaining our competitiveness and efficiency.Â  We can also manage strikes, although we do our utmost to avoid them. We will continue to negotiate and conclude union agreements over this winter.Â  While we hope to finalise more union agreements in the coming months, we cannot rule out occasional industrial action, but we expect their impact to be very limited.

– The risk of a hard (â€œno-deal”) Brexit in March 2019 is rising.Â  While we hope that a 21-month transition agreement from March 2019 to December 2020 will be implemented (and extended), we remain concerned that the time to complete such an agreement is shortening.Â  In the event of a hard Brexit our UK shareholders will be treated as non-EU.Â  In such an event the Board will restrict the voting rights of all non-EU shareholders (and confine them to selling shares only to EU nationals) to ensure that Ryanair remains majority owned and controlled by EU shareholders.Â  We have applied for a UK AOC to protect our 3 domestic UK routes and are on track to receive it before the end of 2018.

– As updated on 1 October, FY19 PAT is guided in a range of â‚¬1.10bn to â‚¬1.20bn (excl. Laudamotion).Â  Following a 3% reduction in H1 fares, we expect fares to fall by c.2% in H2 due to weaker than expected forward fares in Q3 (particularly the October school mid-term and Christmas) and the absence of Easter in Q4.Â  A 1% reduction in winter capacity means that FY19 traffic will grow by 6% to 138m (141m incl. Laudamotion).Â  Our fuel bill will be approx. â‚¬460m higher than last year and â€œOther Costs” will be negatively impacted by higher EU261 costs.Â  Ancillaries continue to perform strongly although (as previously highlighted) the H2 figures will be adversely impacted by timing differences on the recognition of certain fees arising from the adoption of IFRS 15 (positive impact in H1).Â  This guidance excludes (exceptional) start-up losses in Laudamotion of approx. â‚¬150m (which are and will be consolidated in the Ryanair Group full year financial results).

– This full year guidance remains heavily dependent on air fares not declining further (they remain soft this winter due to excess capacity in Europe), the impact of significantly higher oil prices on our unhedged exposures, the absence of unforeseen security events, ATC and other strikes and the impact of negative Brexit developments. We cannot rule out further base closures or capacity cuts this winter if oil prices rise or air fares fall further. Winter trading may be positively impacted by the rate and timing of other airline failures which is already creating a ready supply of well trained pilots and cabin crew for S.19 growth.”