Norwegian has launched its first nonstop transatlantic flight from Stewart International Airport to Edinburgh Airport in Scotland. This is the first of five routes that will operate from the airport. The airline’s other routes to Ireland, Northern Ireland and Norway will launch in July. 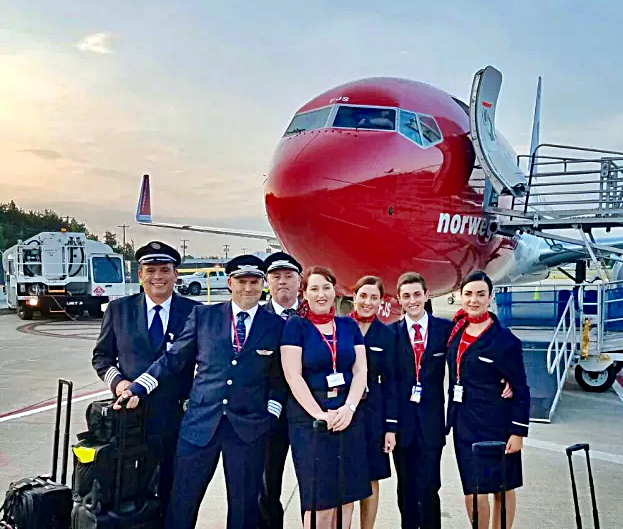 Stewart International Airport will also be the home of Norwegian’s newest crew base — its third in the United States. The airline will station two Boeing 737 MAX aircraft and 30 pilots and flight attendants at the Orange County airport to accommodate the new service offering, with plans to hire additional crew later in the year.

– Four years ago, Norwegian’s low-cost long-haul flights revolutionized transatlantic travel, and we are pleased to pave the way once more with our long-anticipated service from Stewart International Airport to several destinations in Europe, said Thomas Ramdahl, Norwegian’s Chief Commercial Officer.

– Serving two destinations from New York allows us to reinforce our commitment to U.S. growth by bringing more tourists to the region and creating even more American jobs.”

– Today’s inaugural Norwegian flight signifies the launch of a new era that will be transformative for Stewart International Airport and the Mid-Hudson Valley region in terms of jobs, tourism, and economic development, said Port Authority Executive Director Pat Foye.

– The airport’s connection to new international destinations offers exciting opportunities for our customers and growth for the airport and the region.”

– Tourism is integral to New York State’s economy, supporting more than 900,000 jobs and generating billions in spending each year, and we are excited to welcome Norwegian and its many international travelers to Stewart Airport, Gavin Landry, Executive Director of Tourism, Empire State Development, said.

– I would encourage visitors to explore all that’s unique to New York State: our world-class parks, museums and historic attractions, and experience the fine restaurants and craft beverage destinations in the picturesque Hudson Valley and throughout Upstate New York.”

– Scotland is more connected than ever before through transport and digital channels, giving it a louder voice within key markets. The United States is our biggest international market, and last year we saw an 18 percent increase in the number of visitors from North America along with a 40 percent increase in spend, Malcolm Roughead, Chief Executive of VisitScotland, said.

– Not only is it exciting to see Norwegian add direct flights between three new destinations in the US and Edinburgh, but these low-cost transatlantic fares also come at a time when the exchange rate is already making Scotland a very appealing destination and this will undoubtedly generate a great deal more interest among US travelers.”

– Just in time for Edinburgh’s famed festival season, we are delighted to be working with Norwegian and VisitScotland to introduce new direct flights from the U.S. into Scotland’s capital. Edinburgh’s legendary festivals are celebrating their 70th anniversary this year so these new route launches couldn’t come at a better time and give more Americans the chance to experience all the special events taking place this summer, said Paul Gauger, Executive Vice President, Americas for VisitBritain.

– Scotland is an extremely popular destination for Americans and Edinburgh is the perfect home base to explore Scotland’s bustling cities — including Glasgow which is less than an hour away — and its breath-taking highlands and islands.”

Norwegian’s new flights to Edinburgh will operate daily during the summer and three times per week (Tuesdays, Thursdays and Sundays) during the winter with fares currently available at Norwegian.com/us for as low as $99 one-way, including taxes. The lowest fares to Scotland and all of Norwegian’s destinations can be found by using the airline’s low fare calendar. Additionally, passengers on all of Norwegian’s routes are eligible to join Norwegian Reward, the airline’s frequent flyer program and can earn CashPoints every time they fly, stay at a hotel or drive a rental car.