When you’re traveling alone — maybe for business — sometimes, it can be hard to know where you could or should go to relax. Especially if you’re a woman, you want an option beyond the hotel bar. Elmira, also known as “Mark Twain Country”, has a place where you can sip excellent beers in an open, inviting setting:Â Upstate Brewing Company.Â I was happy to be hosted to experience it.Â With its open garage door entrance, it allows you to casually slip in and out, to check out the different “scenes”. Of course, it’s probably most excellent when the weather is perfect, which it was for me.

A couple of their beers is sold at New York Mets games. They’ll always be in cans — to keep them fresher! Many of the varieties incorporate locally grown ingredients.
I tried a flight of five beers.Â Common Sense, their flagship beer available at the Mets games, is what they refer to as a “Kentucky Common Ale”.Â  They describe it as “A pre-Prohibition style to a dark cream ale, low in hops, dark in color, but easy drinking.” It is easy to drink, especially for a dark beer, but I did notice a little hops bite. It would be good with a big hot dog loaded with everything.
Lemonade SourÂ is pils and wheat hopped with Amarillo and finished with 14 lbs. of lemon juice and zest! It’s like unsweetened lemonade with a good dose of peel. 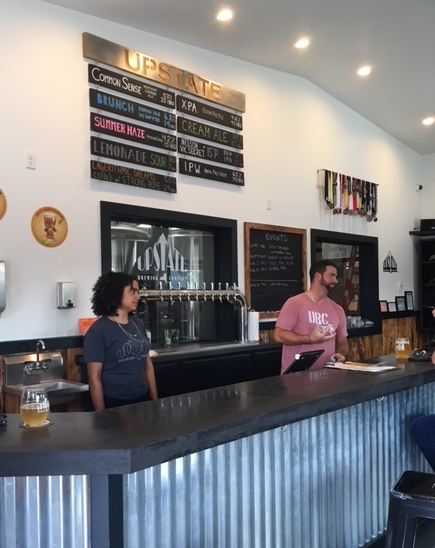 They describeÂ Summer HazeÂ as “An easy drinking wheat beer brewed with rye and dry hopped with Amarillo and Pekko hops, with a flavor and aroma of light citrus and tropical fruit.” This beer is remarkably white wine-like! I also noticed notes of tropical fruit peels.
Cream AleÂ is described as “Pale straw in color with a soft malt aroma highlighted by sweet notes of corn.” This is a nice, light and refreshing beer.
BrunchÂ is an outstanding beer! It changes slightly from batch to batch, but generally has a coffee note. This one was made with local Bell’s medium roast house beans and toasted coconut. There’s some sweetness and carbonation. I’m sure it would be great the morning after!
byÂ tamarmarcopolostyle
Read more about The Upstate Brewing Company HEREÂ – Related stuff:Â Tamar Alexia Fleishman’s Marco Polo style discoveries: The cuisine of the Omni Homestead Resort in Hot Springs, VaÂ (october 2017) – Easy, luscious cold-brew coffee with Coffee Gator by tamarmarcopolostyleÂ (february 2018) 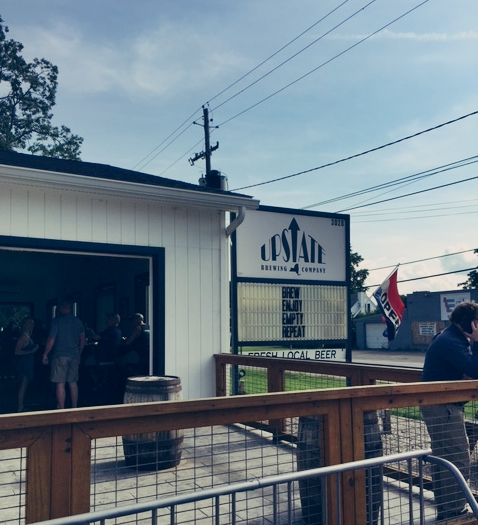 They host food trucks outside to get your snack on and occasionally have live music. (picturesource: tamarmarcopolostyle)