WestJet has announcedÂ August 2017Â traffic results with a load factor of 90.6 per cent, an increase of 4.1 percentage points year over year. Revenue passenger miles (RPMs), or traffic, increased 10.6 per cent year over year, and capacity, measured in available seat miles (ASMs), grew 5.6 per cent over the same period. The airline flew an all-time monthly record of 2.3 million guests in August, a year-over-year increase of 13.8 per cent or approximately 288,000 additional guests. 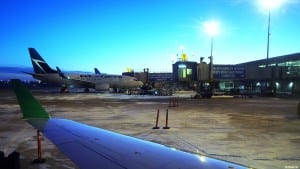 – We are extremely pleased with our double-digit traffic growth, as we reported our highest ever load factor of 90.6 per cent, flew the most monthly number of guests in our twenty-one year history and set a new single day record onÂ August 8thÂ by flying 81,423 guests, said WestJet President and CEOÂ Gregg Saretsky.

– My sincere thanks go out to our over 13,000 WestJetters for continuing to deliver our award-winning brand of friendly caring service over this record breaking summer season.”